Holy Hands: An Investigation of Ritual Gesture Use by Black and White Baptist Preachers in Durham, NC 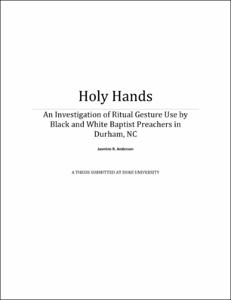 View / Download
928.2 Kb
Date
Author
Anderson, Jasmine
Repository Usage Stats
532
views
416
downloads
Abstract
Recently many researchers have labored to put the linguistic body back together. Historically, linguistic study has focused on the sounds produced by the mouth, but more recently work has emphasized the importance of body language and gesture in the act of communication. Some even go so far as to posit that gesture preceded spoken language in the phylogeny of communication. Over time, the twin ideas that gesture is used to aid communicative acts and that such gestures are socially and culturally bound has become more and more acceptable. This work attempts to see if and how gestural variance occurs by analyzing the ritual gestures of White and Black preachers in Durham, North Carolina region. It is known that the Baptist denomination, established around 1846, has a history of evangelical preachers and a strong Christian culture tied to it. It is also common to the social sciences that African American culture is distinct as juxtaposed to standard white culture, and this trend extends into the realm of religion as well. In the study of verbal language, ethnicity is seen as a cultural variable that influences language differentiation. The principal question for this study is if ethnicity correlates with a variance in the ritual gesture of preachers. This particular work will focus on ritual gestures employed by Black and White preachers during the sermon. Ritual gestures are those movements associated with common Christian ceremonies such as communion and baptism and those acts taught in this particular denomination as having time-honored biblical value. The product of this study is the illumination of four outstanding points: * Gestural studies done by psychologists and linguists over the last several decades have shown that verbal articulation and the gestures that accompany them form a continuum of convention. * Ritual gestures inhabit a space in the human mind that lies between conscious and unconscious thought. * Even though both Black and White Baptist preachers belong to a single religious tradition there are marked gestural differences. * That these differences relay some sort of cultural information about church/sermon style and the social space of religion within the two ethnic groups.
Type
Honors thesis
Department
English
Subject
Baptist
gesture
ethnicity
homiletics
ritual gesture
communicative gesture
Permalink
https://hdl.handle.net/10161/2514
Citation
Anderson, Jasmine (2010). Holy Hands: An Investigation of Ritual Gesture Use by Black and White Baptist Preachers in Durham, NC. Honors thesis, Duke University. Retrieved from https://hdl.handle.net/10161/2514.
Collections
More Info
Show full item record