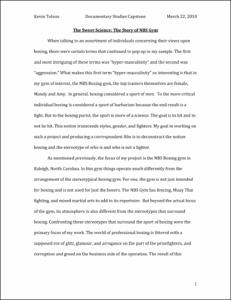 View / Download
98.1 Kb
Date
Author
Tolson, Kevin
Repository Usage Stats
339
views
483
downloads
Abstract
For my final capstone project in Documentary Studies in order to earn my certificate, I will be making a film focused on the lives of local boxers. The goal is to learn why do people fight with their hands and why did the sport become so mainstream and why has it now fallen into the background. In order to learn this information, I want to speak with the boxers and the fighters themselves. Why do you compete? What is the motivation behind it? More specifically, I want to delve into the question of why does you fight. I want to investigate what drives men/women into combat, to tear down their bodies for training, to expose themselves to punishment in hopes of achieving “victory.” There is a human element and an intricate story that surrounds each fighter and every individual has something unique that motivates him or her. By looking into these stories, I plan to breakdown the mystique that envelops the fight world. In terms of the actual structure of this project, I will make use of multiple first person interviews with local North Carolina boxers in order to discuss their particular boxing histories and that which has driven them to the sport. The story line of the film with be driven by these first person narratives but they will also be spliced with B-Roll of these fighters in training and also with their actual bouts. The goal will be to find boxers of different proficiency levels in order to provide a more complete assessment of the sport and of competition. The structure of the film will be to present each of the fighter’s stories and backgrounds and then proceed forward with their actual performance in the ring. Once we have set up this initial function, the film will them portray the fighters’ reactions to their performances and how they adjust following success or difficulty. In addition to looking into the world of the fighters I will also spend time with the trainer to see how he or she manages multiple personalities and how he is able to channel that which he knows into his fighters. Through these first person interviews, live fighting and training footage, and personal reaction I will develop a film of human interest but also of action that will answer the question of why we compete. The gym of focus will be the Triangle Boxing Gym in Raleigh, NC. My research will begin at the gym and follow these central characters throughout a boxing season. By talking to these fighters and gaining insight into the sport they love, this project can be used to break down the mystique of boxing and help us to truly understand their motivation and to understand why it is called the Sweet Science.
Type
Honors thesis
Department
Documentary Studies
Permalink
https://hdl.handle.net/10161/2517
Citation
Tolson, Kevin (2010). The Sweet Science. Honors thesis, Duke University. Retrieved from https://hdl.handle.net/10161/2517.
Collections
More Info
Show full item record