Out of Many, One?: the voice(s) in the crusade ideology of Las Navas de Tolosa 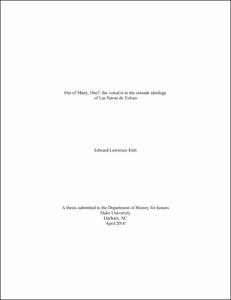 View / Download
748.4 Kb
Date
Author
Holt, Edward
Repository Usage Stats
481
views
2,472
downloads
Abstract
The record of Las Navas de Tolosa offers two competing narratives: one papal and the other monarchical. Both possessed claims to leadership; but which one actually led in this case? My thesis explores the ways in which the monarchy of Castile under Alfonso VIII and the papacy under Innocent III transformed crusade ideology through the incorporation of institutional ambitions into crusade records. Through the rhetoric and careful definition of unity, pilgrimage and penance, these two institutions presented different claims on the leadership of Las Navas de Tolosa and more importantly their identity as a power in medieval Europe. The medieval church was the dominant institution of the Middle Ages and Pope Innocent III was arguably its most powerful ruler. During Las Navas de Tolosa, Innocent III furthered the temporal reach of the see of St. Peter by promoting the papacy as the leader of crusade against all foes. King Alfonso VIII of Castile recognized the encroachment on his powers and contested the ideology with crusade ideology of his own. Not only did he combat the papal threat but also he elevated Castile as the principal kingdom of Spain. And, while each of the voices had their own agenda, they worked as one to form a Christian response to Miramolin, one of the largest threats to the medieval west. Through their changes to crusade ideology, they altered the landscape of monarchical and papal relations for the next three hundred years.
Description
Honors thesis. Winner of the William T. Laprade Prize.
Type
Honors thesis
Department
History
Subject
Las Navas de Tolosa, Battle of, Spain, 1212.
Crusades.
Innocent III, Pope, 1160 or 61-1216.
Alfonso VIII, King of Castile, 1155-1214.
Troubadours.
Permalink
https://hdl.handle.net/10161/2518
Citation
Holt, Edward (2010). Out of Many, One?: the voice(s) in the crusade ideology of Las Navas de Tolosa. Honors thesis, Duke University. Retrieved from https://hdl.handle.net/10161/2518.
Collections
More Info
Show full item record