The Economics of Redemption and Retribution in Isaiah 40-66 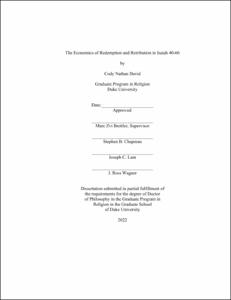 Economics primarily focuses on describing the systems that govern the allocation of resources in human society. Many religious traditions also use terminology from these economic systems to express theological concepts; within the Hebrew Bible, this is especially evident in Isaiah 40-66. Drawing from theories from the field of Cognitive Linguistics, particularly the Blending Theory of Gilles Fauconnier and Mark Turner and treatments of literary metaphor by Paul Werth and others, I argue that redemption in Isaiah 40-55 draws from the ancient economic practice of paying a price to buy somebody back. YHWH, having sold Israel into debt servitude in the exile to pay off the debt of her sins, later redeems her by paying off this debt himself. The language that the authors use to express YHWH’s retribution also comes from the economic realm—YHWH pays wages to Israel and YHWH’s enemies in exchange for work. These two images are distributed unequally in different parts of Isa 40-66, as redemption discourse abounds only in Isa 40-55 and retribution discourse abounds only in Isa 56-66. Other economic metaphors also appear on a smaller scale in this corpus, which shows the extent to which economic thought was starting to take hold of the imaginations of the Judean thinkers of the time.

By explaining the meanings of redemption and retribution in their original historical contexts, this dissertation also sheds light on many other key motifs in Isaiah 40-66 (such as sin, forgiveness, atonement, mercy and retribution), which leads to a better understanding of the section as a whole. My conclusions also bear on other discussions in Hebrew Bible scholarship. First, this study fills a lacuna in treatments of metaphors in the Hebrew Bible by treating economic metaphors, which have not received sufficient attention. Second, it argues that the rise in economic rhetoric amongst the Judeans started already in the exile and thus earlier than previously recognized. Third, it indicates that different authors wrote Isa 40-55 and Isa 56-66. Finally, it shows that Isa 40-55 is an authorial or editorial unity and that Isa 56-66 is a composite text.