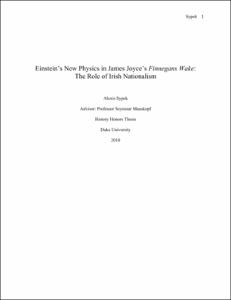 View / Download
377.7 Kb
Date
Author
Sypek, Alexis
Repository Usage Stats
749
views
5,460
downloads
Abstract
In previous centuries imaginations were ignited by scientific advancement. Inspired by astronomical developments, probed to questioning by the discovery of new worlds, and excited by technological advances that asserted humanity’s authority over nature, there is a long-standing tradition of science acting as muse for innumerable literary endeavors. This relationship held true for James Joyce as he was creating Finnegans Wake from 1923 to 1939. However, scholarship that connects 20th century literary production and the rapidly advancing science based on Einstein’s groundbreaking work, first published in 1905, is not as developed as that of previous centuries. Also, while Joycean scholarship abounds, Joyce’s precise exposure to the highly creative science of Einstein is often only briefly discussed or altogether absent. Thus, a unique challenge presents itself. In Finnegans Wake Joyce problematizes time and temporal sequence yet he does this independently of his response to the nationalist question. While the two experiments in both political commentary and Einsteinian physics may not have been consciously linked, the aim of this thesis is to provide a new voice in exploring the use of relativity and quantum theory within Joyce’s national narrative. To trace the role historical events played in the transference from laboratory to bookshelf, it is first necessary to explore Joyce’s precise attitude towards the movement that held his attention the most: Irish nationalism. Once Joyce’s unique political temperament is understood, the next step is to tease out Joyce’s understanding of new physics. Finally, the two distinct trends of Joyce’s nationalism and his scientific exposure must be brought together by the text itself.
Description
Honors Thesis - Highest Distinction Winner of the William T. Laprade Prize
Type
Honors thesis
Department
History
Subject
James Joyce
Albert Einstein
Irish Nationalism
Relativity
Quantum Theory
Permalink
https://hdl.handle.net/10161/2524
Citation
Sypek, Alexis (2010). Einstein’s New Physics in James Joyce’s Finnegans Wake: The Role of Irish Nationalism. Honors thesis, Duke University. Retrieved from https://hdl.handle.net/10161/2524.
Collections
More Info
Show full item record