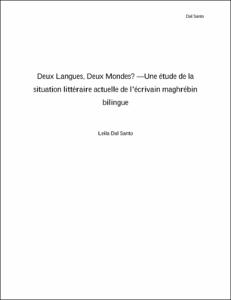 View / Download
293.6 Kb
Date
Author
Dal Santo, Leila
Repository Usage Stats
566
views
3,512
downloads
Abstract
Since gaining Independence from France in 1962 and 1956 respectively, Algeria and Morocco have sought to reinstate the prestige of the Arabic language. French, however, has not completely been eliminated from the daily lives of the Maghreb population, and today the language of the colonizer remains closely associated with modernization and technology as well as subjects, such as sexuality, considered “taboo” by many Muslim societies. Conversely, Modern Standard Arabic and Classical Arabic, though rarely spoken in the informal daily setting, represent the universal language of the Arab people, as well as the language of Islam. This study examines the polemic of language choice in Maghreb literature in the 21st Century, demonstrating that the writer’s choice of language is circumscribed by extra-literary considerations (social and political) emanating from nationalist voices within his own country as well from Arab governments and their censorship laws, especially from Egypt, the publishing capital of the Arab world. In short, the suppression of spoken languages such as French and Maghrebi dialects by the post-Independence Arabization policies and subsequent failures in the education system evidenced by high illiteracy rates have prompted bilingual Maghreb authors to publish outside their respective countries. On a larger scale, the absence of an educated Arab public space and the censorship of many liberal texts have forced many Maghreb authors to write in French in an attempt to interact with a larger international community. Therefore, given the contemporary multilingual landscape of the Maghreb, this study questions the possibility and relevance of a “national literature” as defined by 19th century notion of a shared language, territory, and religion.
Description
Honors thesis - James Rolleston Prize for Best Honors Thesis written in a Foreign Language
Type
Honors thesis
Department
Romance Studies
Subject
littérature maghrébine
Arabisation
censure
l'Algérie
le Maroc
nation
Permalink
https://hdl.handle.net/10161/2531
Citation
Dal Santo, Leila (2010). Deux Langues, Deux Mondes? —Une étude de la situation littéraire actuelle de l’écrivain maghrébin bilingue. Honors thesis, Duke University. Retrieved from https://hdl.handle.net/10161/2531.
Collections
More Info
Show full item record