Mill and Cairnes and the Emergence of Marginalism in England 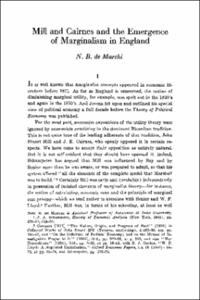 View / Download
1.4 Mb
Date
Author
De, Marchi Neil
Repository Usage Stats
286
views
608
downloads
Abstract
It is well known that marginalist concepts appeared in economic literature before 1871. As far as England is concerned, the notion of diminishing marginal utility, for example, was spelt out in the 1830’s and again in the 1850’s. And Jevons hit upon and outlined his special view of political economy a full decade before the Theory of Political Economy was published.
Type
Journal article
Subject
history
marginalist concepts
Permalink
https://hdl.handle.net/10161/2538
Collections
More Info
Show full item record