Confidence and gradation in causal judgment. 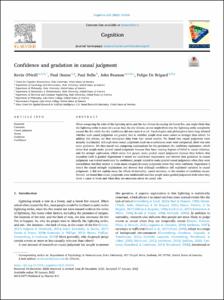 Fuchsberg-Levine Family Associate Professor
Most of my research focuses on the way in which memory and imagination interact. So far, I have explored ways in which episodic memory both guides and constrains episodic counterfactual thinking (i.e., thoughts about alternative ways in which past personal events could have occurred), and how this interaction affects the perceived plausibility of imagined counterfactual events. I also explore the differential contribution of episodic and semantic memory in the generation of different kinds of co Assistant Professor of Biostatistics & Bioinformatics
My research focuses on the application of machine learning methods to the analysis of brain data and behavior. I have a special interest in the neurobiology of reward and decision-making, particularly issues surrounding foraging, impulsivity, and self-control. More generally, I am interested in computational principles underlying brain organization at the mesoscale, and work in my lab studies phenomena that range from complex social behaviors to coding principles of the retina.
Alphabetical list of authors with Scholars@Duke profiles.