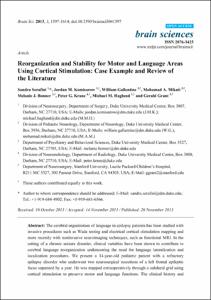 Adjunct Assistant Professor in the Department of Neurosurgery
Carrie R. Muh is a Pediatric Neurosurgeon specializing in the surgical treatment of epilepsy. She worked full time at Duke University from 2011 to 2019 and became Adjunct faculty when she moved to New York Medical College in 2019. Dr. Muh grew up in California and began scientific research in high school as part of the NASA Student Space Biology initiative. She went on to study at the Massachusetts Institute of Technology (MIT) where she earned two Bachelor's degrees, in Biology
Alphabetical list of authors with Scholars@Duke profiles.