Child Nutrition in India in the Nineties 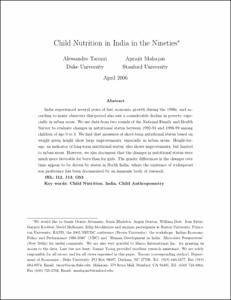 View / Download
808.6 Kb
Date
Authors
Tarozzi, Alessandro
Mahajan, Aprajit
Repository Usage Stats
317
views
1,171
downloads
Abstract
India experienced several years of fast economic growth during the 1990s, and according to many observers this period also saw a considerable decline in poverty, especially in urban areas. We use data from two rounds of the National Family and Health Survey to evaluate changes in nutritional status between 1992-93 and 1998-99 among children of age 0 to 3. We find that measures of short-term nutritional status based on weight given height show large improvements, especially in urban areas. Height-forage, an indicator of long-term nutritional status, also shows improvements, but limited to urban areas. However, we also document that the changes in nutritional status were much more favorable for boys than for girls. The gender differences in the changes over time appear to be driven by states in North India, where the existence of widespread son preference has been documented by an immense body of research.
Type
Journal article
Subject
Child Anthropometry
Child Nutrition
India
Permalink
https://hdl.handle.net/10161/2552
Collections
More Info
Show full item record