The Earnings Effects of Sexual Orientation 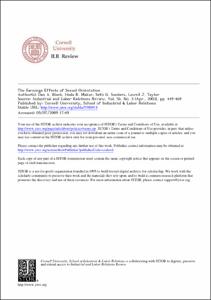 View / Download
593.9 Kb
Date
Authors
Black, Dan A
Makar, Hoda R
Sanders, Seth
Taylor, Lowell J
Repository Usage Stats
281
views
1,700
downloads
Abstract
This investigation of the effect of sexual orientation on earnings employs General Social Survey data from 1989-96. Depending largely on the definition of sexual orientation used, earnings are estimated as having been between 14% and 16% lower for gay men than for heterosexual men, and between 20% and 34% higher for lesbian women than for heterosexual women. This evidence, the authors suggest, is consistent with either of two complementary constructions: Gary Becker's argument that male/female earnings differentials are rooted in specialization within households and in optimal human capital accumulation decisions individuals make when they are young; and Claudia Goldin's observations about marriage-based gender discrimination, according to which the paternalistic "protection" of wives and mothers from the world of work has tended to overlook lesbians.
Type
Journal article
Subject
Earnings
Sexual Orientation
specialization
Permalink
https://hdl.handle.net/10161/2564
Collections
More Info
Show full item record Professor of Economics
Professor Sanders specializes in the fields of economics and public policy. His research focuses specifically on four different lines of study, which include the trends of race and gender in relation to earnings among the highly educated; the effects of extreme economic changes on workers and families; the performance of gay and lesbian families within the economy; and the economic consequences of teenage childbearing. He has received numerous grants for his research, including several from the
This author no longer has a Scholars@Duke profile, so the information shown here reflects their Duke status at the time this item was deposited.