DISTRIBUTION OF HIGHLY MIGRATORY MARINE MAMMALS AND SEABIRDS IN THE EASTERN NORTH PACIFIC: ARE EXISITNG MARINE PROTECTED AREAS IN THE RIGHT PLACE? 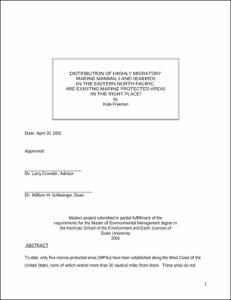