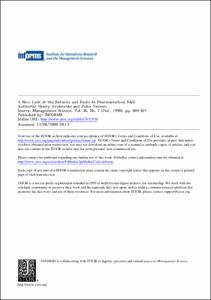 View / Download
461.4 Kb
Date
Authors
Grabowski, Henry
John Vernon
Repository Usage Stats
699
views
2,542
downloads
Abstract
This study investigates the returns to R&D for 100 new drugs introduced into the United States during the decade of the 1970s. In contrast to prior studies, it incorporates several significant structural changes that have occurred in the pharmaceutical industry during the 1980s. These include higher real drug prices and a greater degree of generic competition. A major finding is that the return on R&D for the average new drug is approximately equal to the 9 percent industry cost of capital. However, the performance of new drugs introduced during the latter half of the 1970s was markedly better than that of early 1970s introductions. This latter finding is consistent with the more rapid rate of industry growth in real R&D expenditures. The study also finds that the variation in returns is highly skewed, with only the top 30 drugs covering mean R&D costs on a fully allocated basis. Finally, it is shown that real drug price increases in the 1980s were necessary for the average new drug introduction to recover its R&D costs.
Type
Journal article
Subject
Pharmaceutical R&D
Returns and Risks
Permalink
https://hdl.handle.net/10161/2605
Collections
More Info
Show full item record