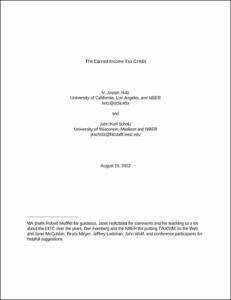 View / Download
282.7 Kb
Authors
Hotz, V Joseph
Scholz, John Karl
Repository Usage Stats
357
views
291
downloads
Abstract
Since its inception in 1975, the Earned Income Tax Credit (EITC) has grown into the largest, Federally-funded means-tested cash assistance program in the United States. In this chapter, we review the political history of the EITC, its rules and goals and provide a broad set of program statistics on its growth and coverage. We summarize conceptual underpinnings of much of the recent economic research on the EITC, discussing participation in the credit and compliance with its provisions, and its effects on labor force participation and hours of work, marriage and fertility, skill formation and consumption. We note that participation rates of the credit are high, rates of credit noncompliance are also high, and that there are theoretical reasons to prefer the EITC to other anti-poverty programs if one's objective is to encourage work among the poor. We also note that the predicted effects of the EITC are not all pro-work, especially with respect to hours and its labor market incentives for two-earner couples. We then summarize the existing empirical research on the behavioral effects of the EITC, paying particularly emphasis to the effects of the 1986, 1990 and 1993 expansions of the credit on labor force participation and hours of work. The literature provides consistent evidence, generated from a variety of empirical approaches, that the EITC positively affects labor force participation. The literature also finds smaller, negative effects on hours of work for people already in the labor market and for secondary workers. We conclude the chapter with a discussion of the ongoing EITC-related policy debates and highlight what, if any, critical economic issues underlie these debates.
Type
Scholarly edition
Subject
H31
I38
Permalink
https://hdl.handle.net/10161/2620
Citation
Hotz, V Joseph; & Scholz, John Karl (n.d.). The Earned Income Tax Credit. Retrieved from https://hdl.handle.net/10161/2620.
Collections
More Info
Show full item record Arts and Sciences Distinguished Professor of Economics
Professor Hotz specializes in the subjects of applied econometrics, labor economics, economic demography, and economics of the family. His studies have investigated the impacts of social programs, such as welfare-to-work training; the relationship between childbearing patterns and labor force participation of U.S. women; the effects of teenage pregnancy; the child care market; the Earned Income Tax Credit; and other such subjects. He began conducting his studies in 1977, and has since publishe