Mill's Unrevised Philosophy of Economics: A Comment on Hausman 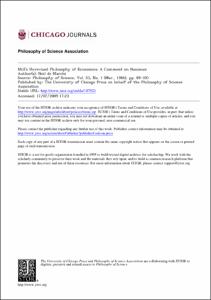 View / Download
1.3 Mb
Date
Author
De, Marchi Neil
Repository Usage Stats
328
views
690
downloads
Abstract
Hausman has argued that Mill in the Logic demands verification of qualified, inexact statements if they are to be considered lawlike. This puts Mill in line with a reasonable interpretation of what modern microeconomists are about, but requires the additional hypothesis that Mill abandoned his earlier stress on modal truth in his 1836 essay on the method of economics. The paper maintains that neither textual nor contextual evidence supports this hypothesis. Moreover, it is superfluous if one attends carefully to how Mill conceived economic science, which occupied a peculiar, somewhat isolated place in his own views on the deductive method and on verification.
Type
Journal article
Subject
mill
philoshophy of economics
Permalink
https://hdl.handle.net/10161/2631
Citation
De Marchi, Neil. Mill's Unrevised Philosophy of Economics: A Comment on Hausman. Philosophy of Science. 53.1 (March 1986): 89-100. Print.
Collections
More Info
Show full item record