The Past as the Future: The Marshallian Approach to Post-Walrasian Econometrics 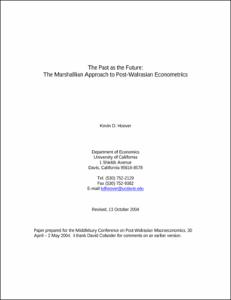 View / Download
156.1 Kb
Date
Author
Hoover, KD
Repository Usage Stats
366
views
2,600
downloads
Abstract
The popular image of the scientific revolution usually pits young revolutionaries against old conservatives. Freeman Dyson (2004, p. 16) observes that, in particle physics in the mid-20th century, something had to change. But in the revolution of quantum electrodynamics, Einstein, Dirac, Heisenberg, Born, and Schödinger were old revolutionaries, while the winners, Feynman, Schwinger, and Tomonaga, were young conservatives. Post-Walrasian economics is not a doctrine, but a slogan announcing that something has to change. Most of the self-conscious efforts to forge a post-Walrasian economics are due to old radicals. Here I want to explore the space of the young conservative: the future is past, particularly in the methodology of Alfred Marshall’s methodological essay, “The Present Position of Economics” (1885). The radical approach identifies the problem as Walrasian theory and seeks to replace it with something better and altogether different. The conservative approach says that theory is not the problem. The problem is rather to establish an empirical discipline that connects theory to the world. Marshall’s methodology places the relationship between theory and empirical tools on center stage. In North America, if not in Europe, the dominant tools of macroeconometrics are the vector autoregression (VAR) and calibration techniques. These techniques reached their current status as the result of two nearly simultaneous reactions to the Cowles-Commission program, which dominated macroeconometrics during the two decades 1950-1970. These are the famous Lucas critique, and the practically influential, if less storied, Sims critique. I will briefly consider the nature of these two critiques and, then, the competing Walrasian and Marshallian visions of the role of theory in econometrics. I conclude with some suggestions about how to do Marshallian macroeconometrics.
Type
Journal article
Subject
marshall
post walrasian econometrics
Permalink
https://hdl.handle.net/10161/2635
Collections
More Info
Show full item record