RURAL GABONESE USES AND RELATIONSHIPS WITH NATURAL RESOURCES AND ANIMALS 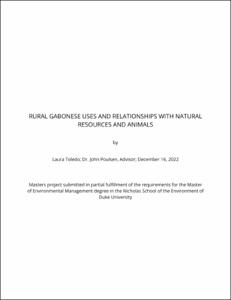 Files
Final Masters Project Report
1.4 Mb
Unsigned Executive Summary
58.1 Kb
Date
Author
Toledo, Laura
Advisor
Poulsen, John
Repository Usage Stats
36
views
34
downloads
Abstract
Human relationships and perceptions of nature and wildlife differ greatly across the modern world. These relationships are dependent on a variety of complex factors and conditions such as daily use, proximity, culture, upbringing, social ties, and financial status among others. Specific experiences and interactions, either one time or recurrent, can particularly shape perceptions and attitudes towards nature. One such interaction, crop raiding, is a widely experienced negative event for many farmers across cultural and financial backgrounds and in countries of various developmental stages. Near Ivindo National Park in Gabon, villages experience crop raiding by a variety of animals, particularly elephants. These negative experiences necessarily shape views on elephant and wildlife conservation initiatives. The support and participation of local people is crucial for the long-term success of any conservation initiative but Gabon has found itself in a difficult situation with anti-elephant protests and sentiments by rural peoples. Compounded with the importance of elephants as one of the last megafaunal seed distributors as well as new discoveries on the importance of elephants in shaping forest composition and therefore its carbon sequestration capabilities, Gabon is facing a culminating conflict of interests. Although various initiatives have attempted to solve the human elephant conflict facing Gabon, the problem is still ongoing. This project focuses on a community-based environmental management (CBEM) approach to understanding villager perception in the region in order to provide perceptions-based suggestions for ongoing conservation efforts of both the forest itself and its wildlife. This project begins with a deeper exploration of human-animal and conservation conflicts, elephant-forest interactions, and applying a learning approach to CBEM. I explain my approach and application of semi-structured interviews to determine (1) native forest tree specie’s value as perceived by villagers and (2) perceptions and attitudes towards wildlife and their conservation. I chose to speak with villagers about these two topics as wildlife composition and forest tree composition are indelibly linked and interrelated. The interviews were conducted in nine different villages near Ivindo National Park and a total of 66 villagers participated. This distribution was chosen to glean a representation of attitudes and perceptions in the region as a whole. The interviewees were composed of different ethnic groups, ages, experiences and with an equal number of male and female participants in total. Responses from interviews were categorized and incorporated into two different binomial general linear regression models in R to determine whether demographic factors affected (1) what tree species were mentioned and (2) overall participant attitudes toward wildlife. The attitude portion of the interviews were analyzed by assigning negative and positive values to responses from perception questions. My analysis suggests that whether a respondent was a hunter or was male affected their overall attitude towards wildlife while distance to the regional capital affected tree species mentioned. Additionally, I found that most villagers value their local forest and forest products highly and feel that they depend on it for survival. And most negative attitudes towards wildlife or conservation were related to negative elephant crop raiding experiences. However, 32% of respondents had positive overall attitudes to wildlife. Conservation agencies should utilize a similar interviewing approach before beginning a conservation initiative in other areas of Gabon. And based on the results from this project’s interviews, agencies should seek hunters and women to champion conservation initiatives in this area, as they are the most likely to have positive attitudes towards wildlife and conservation efforts. Moreover, it is critical for conservation agencies and Gabonese entities to address the elephant crop raiding problem. Although communities are applying a variety of methods on their own to stop elephants (such as fencing, noise, and fire), it is not enough to detract elephants from their fields and the continued negative experiences are perpetuating dissatisfaction with Gabonese entities and conservation agencies. First and foremost, conservation agencies must address the threat of elephants to farmers and their livelihoods by visibly reducing it in order to curb negative attitudes. I suggest this be done through a CBEM approach so that these communities are actively involved in working towards the solutions and feel empowered to manage their natural environment.
Type
Master's project
Department
Nicholas School of the Environment
Subject
community based environmental management
human wildlife conflict
conservation conflict
Gabon
tropical forests
wildlife management
Permalink
https://hdl.handle.net/10161/26365
Citation
Toledo, Laura (2022). RURAL GABONESE USES AND RELATIONSHIPS WITH NATURAL RESOURCES AND ANIMALS. Master's project, Duke University. Retrieved from https://hdl.handle.net/10161/26365.
Collections
More Info
Show full item record