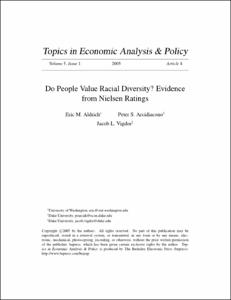 Professor of Economics
Professor Arcidiacono specializes in research involving applied microeconomics, applied economics, and labor economics. His research primarily focuses on education and discrimination. His work focuses specifically on the exploration of a variety of subjects, such as structural estimation, affirmative action, minimum wages, teen sex, discrimination, higher education, and dynamic discrete choice models, among others. He recently received funding from a National Science Foundation Grant for his pro