The Success of Mill's Principles 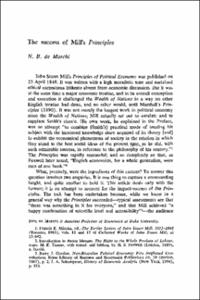 View / Download
3.1 Mb
Date
Author
de Marchi, NB
Repository Usage Stats
371
views
1,817
downloads
Abstract
John Stuart Mill’s Principles of Political Economy was published on 25 April 1848. It was written with a high moralistic tone and sustained ethical earnestness hitherto absent from economic discussion. But it was at the same time a major economic treatise, and in its overall conception and execution it challenged the Wealth of Nations in a way no other English treatise had done, and no other would, until Marshall’s Principles (1 890). It was not merely the longest work in political economy since the Wealth of Nations; Mill actually set out to emulate and to supplant Smith’s classic. His own work, he explained in the Preface, was an attempt “to combine [Smith’s] practical mode of treating his subject with the increased knowledge since acquired of its theory [and] to exhibit the economical phenomena of society in the relation in which they stand to the best social ideas of the present.,.t@e,,G,ahse did, with such admirable success, in reference to the philosophy of his century.” The Principles was rapidly successful; and so completely so that, as Foxwell later noted, “English economists, for a whole generation, were men of one book.”2
Type
Journal article
Subject
john stuart mills
Permalink
https://hdl.handle.net/10161/2646
Published Version (Please cite this version)
10.1215/00182702-6-2-119
Publication Info
de Marchi, NB (1974). The Success of Mill's Principles. 10.1215/00182702-6-2-119. Retrieved from https://hdl.handle.net/10161/2646.
This is constructed from limited available data and may be imprecise. To cite this article, please review & use the official citation provided by the journal.
Collections
More Info
Show full item record