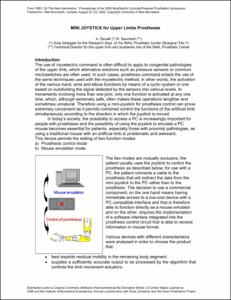 View / Download
418.1 Kb
Date
Authors
Davelli, A.
Sacchetti, R.
Repository Usage Stats
526
views
845
downloads
Abstract
The use of myoelectric command is often difficult to apply to congenital pathologies of the upper limb, which alternative solutions such as pressure sensors or common microswitches are often used. In such cases, prosthesis command entails the use of the same techniques used with the myoelectric method, in other words, the activation of the various hand, wrist and elbow functions by means of a cyclic system or one based on subdividing the signal detected by the sensors into various levels. In movements involving more than one joint, only one function is activated at any one time, which, although extremely safe, often makes these operations lengthier and sometimes unnatural. Therefore using a mini-joystick for prosthesis control can prove extremely convenient as it permits combined control the functions of the artificial limb simultaneously according to the direction in which the joystick is moved.
Type
Other article
Subject
Joystick
Upper Limb Prosthetics
Permalink
https://hdl.handle.net/10161/2659
Citation
MEC '02 : the next generation : University of New Brunswick's Myoelectric Controls/Powered Prosthetics Symposium, Fredericton, N.B., Canada, August 21-23, 2002 : conference proceedings.
Collections
More Info
Show full item record