MANATEE WINTER DISTRIBUTION IN KINGS BAY, CRYSTAL RIVER, FL AND ITS APPLICATION TO THE DESIGN OF MANATEE SPEEED ZONES AND SANCTUARIES IN THE BAY 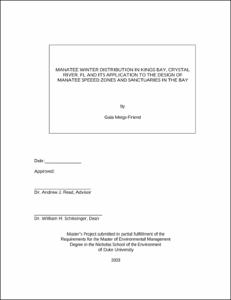 View / Download
1.3 Mb
Date
Author
Meigs-Friend, Gaia
Advisor
Read, Andrew J
Repository Usage Stats
333
views
241
downloads
Abstract
The Florida manatee, Trichechus manatus latirostris, and the other members of the order Sirenia form a unique group of animals. The four Sirenian species are the only herbivorous marine mammals. Because of their ecology and physiology, the Florida subspecies is only found in a specific range of environmental conditions, which are also popular with humans, often resulting in direct conflict between humans and manatees. Manatees are large, long-lived animals and have low potential rates of population increase. This, together with the manatee’s limited range, and frequent negative interactions with humans led to the species being federally listed as endangered in 1967 (U.S. Fish and Wildlife Service 2001). The objective of this study was to understand winter distributional patterns of manatees in Kings Bay and use this information to determine whether existing manatee sanctuaries and speed zones are appropriate or need to be modified. This information will aid the management decisions of the State and Federal agencies responsible for protecting the species in this area vital to manatees.
Type
Master's project
Department
Nicholas School of the Environment and Earth Sciences
Subject
Florida manatee (Trichechus manatus latirostris)
Kings Bay, FL
Sanctuaries
Speed Zones
Permalink
https://hdl.handle.net/10161/268
Citation
Meigs-Friend, Gaia (2003). MANATEE WINTER DISTRIBUTION IN KINGS BAY, CRYSTAL RIVER, FL AND ITS APPLICATION TO THE DESIGN OF MANATEE SPEEED ZONES AND SANCTUARIES IN THE BAY. Master's project, Duke University. Retrieved from https://hdl.handle.net/10161/268.
Collections
More Info
Show full item record