Entaglement of Humpback Whales in Fishing Gear: Description of Injuries and Entanglement Patterns 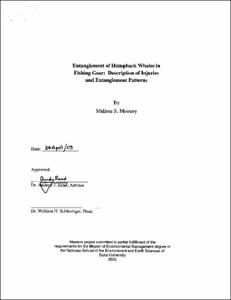 View / Download
5.1 Mb
Date
Author
Mooney, Melissa S.
Advisor
Read, Andrew J
Repository Usage Stats
333
views
233
downloads
Abstract
In the Gulf of Maine, the entanglement of humpback whales in fishing gear is a substantial source of human-caused mortality. The current mortality and serious injury of humpback whales in the Gulf of Maine is twice the Potential Biological Removal (PBR) level set for this population. Researchers and managers are challenged to reduce entanglement to below PBR without extensive information on many important factors. The goal of this study was to describe entanglement injuries and investigate whether different fishing gear types, particularly pot and net fisheries, resulted in distinctive entanglement patterns of humpback whales from the Gulf of Maine. I searched the Center for Coastal Studies' entanglement database for whales that fit the following criteria: the entanglement occurred between 1995 and 2002, the whale was photographed during the disentanglement, and the gear type or line type of the entangling gear was known. Sixteen cases were identified that fit the criteria. Three cases involved entanglements in pot fishery gear, four in net gear, and nine cases with known line type. I qualitatively analyzed photographs from these sixteen cases to describe the injuries and to investigate whether any entanglement patterns could be determined based on gear type in terms of location of entanglement on whale, presence of trailing gear, presence of buoys or high flyers, free swimming versus anchored in gear, disentanglement success, or type of injury. I was unable to find a relationship between entangling gear type and any of the factors assessed. I discuss potential reasons for the finding of no relationship as well as considerations for future research in this area.
Type
Master's project
Department
Nicholas School of the Environment and Earth Sciences
Subject
Gulf of Maine
Humpback whales (Megaptera novaeangliae)
Entanglement
Potential Biological Removal (PBR)
Permalink
https://hdl.handle.net/10161/269
Citation
Mooney, Melissa S. (2003). Entaglement of Humpback Whales in Fishing Gear: Description of Injuries and Entanglement Patterns. Master's project, Duke University. Retrieved from https://hdl.handle.net/10161/269.
Collections
More Info
Show full item record