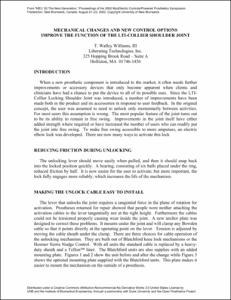 View / Download
449.2 Kb
Date
Author
Williams, T. Walley III
Repository Usage Stats
233
views
833
downloads
Abstract
When a new prosthetic component is introduced to the market, it often needs further improvements or accessory devices that only become apparent when clients and clinicians have had a chance to put the device to all of its possible uses. Since the LTICollier Locking Shoulder Joint was introduced, a number of improvements have been made both in the product and its accessories in response to user feedback. In the original concept, the user was assumed to need to unlock only momentarily between activities. For most users this assumption is wrong. The most popular feature of the joint turns out to be its ability to remain in free swing. Improvements in the joint itself have either added strength where required or have increased the number of users who can readily put the joint into free swing. To make free swing accessible to more amputees, an electric elbow lock was developed. There are now many ways to activate this lock
Type
Other article
Subject
Shoulder Joint
Permalink
https://hdl.handle.net/10161/2696
Citation
MEC '02 : the next generation : University of New Brunswick's Myoelectric Controls/Powered Prosthetics Symposium, Fredericton, N.B., Canada, August 21-23, 2002 : conference proceedings.
Collections
More Info
Show full item record