THE EFFECT OF CONTROLLER DELAY ON BOX AND BLOCK TEST PERFORMANCE 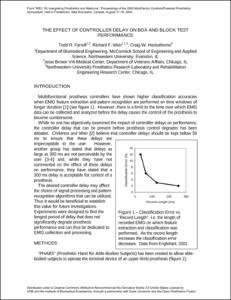 View / Download
282.7 Kb
Date
Authors
Farrell, Todd R.
Weir, Richard F.
Heckathorne, Craig W.
Repository Usage Stats
447
views
832
downloads
Abstract
Multifunctional prosthesis controllers have shown higher classification accuracies when EMG feature extraction and pattern recognition are performed on time windows of longer duration [1] (see figure 1). However, there is a limit to the time over which EMG data can be collected and analyzed before the delay causes the control of the prosthesis to become cumbersome. While no one has objectively examined the impact of controller delays on performance, the controller delay that can be present before prosthesis control degrades has been debated. Childress and Weir [2] believe that controller delays should be kept below 50 ms to ensure that these delays are imperceptible to the user. However, another group has stated that delays as large as 300 ms are not perceivable by the user [3-4] and, while they have not commented on the effect of these delays on performance, they have stated that a 300 ms delay is acceptable for control of a prosthesis. The desired controller delay may affect the choice of signal processing and pattern recognition algorithms that can be utilized. Thus it would be beneficial to establish this value for future investigations. Experiments were designed to find the longest period of delay that does not significantly degrade prosthesis performance and can thus be dedicated to EMG collection and processing.
Type
Other article
Subject
controller delay
Permalink
https://hdl.handle.net/10161/2705
Citation
Proceedings of the MEC’05 conference, UNB; 2005.
Collections
More Info
Show full item record