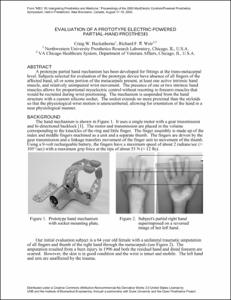 View / Download
419.1 Kb
Date
Authors
Heckathorne, Craig W.
Weir, Richard F.
Repository Usage Stats
339
views
422
downloads
Abstract
A prototype partial hand mechanism has been developed for fittings at the trans-metacarpal level. Subjects selected for evaluation of the prototype device have absence of all fingers of the affected hand, all or some portion of the metacarpals present, at least one active intrinsic hand muscle, and relatively unimpaired wrist movement. The presence of one or two intrinsic hand muscles allows for proportional myoelectric control without resorting to forearm muscles that would be recruited during wrist positioning. The mechanism is suspended from the hand structure with a custom silicone socket. The socket extends no more proximal than the styloids so that the physiological wrist motion is unencumbered, allowing for orientation of the hand in a near physiological manner.
Type
Other article
Subject
electric powered
Prosthetic Hand
Permalink
https://hdl.handle.net/10161/2710
Citation
Proceedings of the MEC’05 conference, UNB; 2005.
Collections
More Info
Show full item record