The Effects of Dredging and Trawling on Continential Shelf Sediment Biochemistry 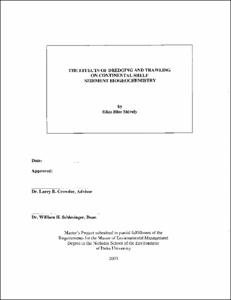 View / Download
10.2 Mb
Date
Author
Shively, Eliza Blue
Advisor
Crowder, Larry B
Repository Usage Stats
417
views
282
downloads
Abstract
The effects of fishing gear on the seabed are well documented. This study specifically investigates the use of dredges and trawls, which are two of the most commonly towed fishing gears both in the U.S. and abroad. These gears are both "active" bottom-contact fishing gear, which means large bag nets, weighing nearly 1500 pounds empty, are towed by fishing vessels and dragged across the seafloor to catch demersal species such as oyster, crabs, clams, halibut, flounder, cod, and shrimp. The effects of these gears on benthic habitats have been much studied and include fish and invertebrate mortality (target and non-target species), loss of habitat, reduced habitat complexity and community diversity, and a reduction in productivity. Conversely, the impacts of dredging and trawling on sediment biogeochemistry have been seldom considered, but could have far-reaching implications when experimental results are extrapolated to larger scales. This study extensively reviews the current and available research on the effects of mobile fishing gear use on sediment biogeochemistry, processes, and sedimentary rnicroenvironments. Specifically, I wanted to answer the following questions: With the assumption ofa high frequency ofdredging and trawling on the world's continental shelves, does mobile fishing gear resuspend and subsequently oxidize carbon that would otherwise be stored in shelf sediments? If so, could this be an unrecognized and significant source ofcarbon dioxide to the water column and consequently the atmosphere thereby contributing to global warming? An extensive literature review yielded only four scientific studies addressing the biogeochemical implications (for C, N, P, and Si) but none of them tackled the effects to carbon beyond the experimental scale. Consequently, with the assistance of Dr. Richard Barber (Duke University), I created a carbon box model to estimate the carbon contribution (using a 1m^2 study area) induced by dredging and trawling relative to a background sea surface carbon value of 2000mM C/m^3. The goal was to establish an upper bound estimate (or maximum) for the amount of CO2 that dredging and trawling could potentially contribute to the atmosphere and to global warming processes. Calculations were done for 50m, 100m, and 200m water depths using total export production values of lOgC/m^2 and 50gC/m^2 and with values of 10% and 50% of that production reaching the seafloor. Additionally, we assumed that 100% of the C reaching the seafloor was oxidized and trapped in the sediments and 100% of that was resuspended by the fishing gear. The value of lOgC/m^2 represents a representative estimate to how much carbon sinks to substrate, while 50gC/m^2 is wildly high and was used to establish an upper bounds for the estimate. The results yielded an approximately 1.5% addition to the carbon in sea surface waters and subsequently the atmosphere; this illustrates that although there is a net transfer of carbon dioxide from the water column to the atmosphere, dredging and trawling is not a significant and unaccounted for source of CO2 and thus does not influence global warming.
Type
Master's project
Department
Nicholas School of the Environment and Earth Sciences
Subject
Dredging
Trawling
Continential Shelf
Sediment
Biochemistry
Carbon Dioxide
Global Warming
Permalink
https://hdl.handle.net/10161/273
Citation
Shively, Eliza Blue (2003). The Effects of Dredging and Trawling on Continential Shelf Sediment Biochemistry. Master's project, Duke University. Retrieved from https://hdl.handle.net/10161/273.
Collections
More Info
Show full item record