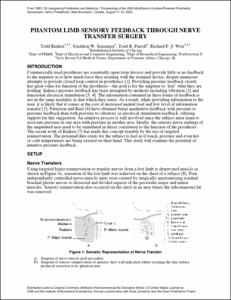 View / Download
1.7 Mb
Date
Authors
Sensinger, Jonathon W.
Kuiken, Todd
Farrell, Todd R.
Weir, Richard F.
Repository Usage Stats
612
views
937
downloads
Abstract
Commercially used prostheses are essentially open-loop devices and provide little or no feedback to the amputee as to how much force they exerting with the terminal device, despite numerous attempts to provide closed loop control in prosthetics [1]. Providing pressure feedback clearly has great value for function of the prosthesis—the goal is for the amputee to ‘feel’ what they are holding. Indirect pressure feedback has been attempted by methods including vibration [2] and functional electrical stimulation [3, 4]. The information contained in these forms of feedback is not in the same modality as that which they sense. As a result, while providing information to the user, it is likely that it comes at the cost of increased mental load and low level of information transfer [5]. Patterson and Katz [6] have obtained better qualitative feedback with pressure to pressure feedback than with pressure to vibratory or electrical stimulation feedback, offering support for this suggestion. An adaptive process is still involved since the subject must learn to associate pressure in one area with pressure in another area. Ideally, the sensory nerve endings of the amputated area need to be stimulated in direct correlation to the function of the prosthesis. The recent work of Kuiken [7] has made this concept feasible by the use of targeted reinnervation. The potential thus exists for the subject to feel as if touch, pressure and even hot or cold temperatures are being exerted on their hand. This study will examine the potential of intuitive pressure feedback.
Type
Other article
Subject
Nerve Transfer Surgery
Permalink
https://hdl.handle.net/10161/2745
Citation
Proceedings of the MEC’05 conference, UNB; 2005.
Collections
More Info
Show full item record