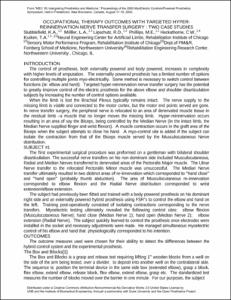 View / Download
248.7 Kb
Date
Authors
Stubblefield, K.A.
Miller, L.A.
Lipschutz, R.D.
Heckathorne, C.W.
Phillips, M.E.
Kuiken, T.A.
Repository Usage Stats
416
views
1,287
downloads
Abstract
The control of prostheses, both externally powered and body powered, increases in complexity with higher levels of amputation. The externally powered prosthesis has a limited number of options for controlling multiple joints myo-electrically. Some method is necessary to switch control between functions (ie: elbow and hand). Targeted hyper-reinnervation nerve transfer surgery has the potential to greatly improve control of the electric prosthesis for the above elbow and shoulder disarticulation subjects by increasing the number of control options available. When the limb is lost the Brachial Plexus typically remains intact. The nerve supply to the missing limb is viable and connected to the motor cortex, but the motor end points served are gone. In nerve transfer surgery, the peripheral nerve is relocated to an area of denervated muscle tissue in the residual limb –a muscle that no longer moves the missing limb. Hyper-reinnervation occurs resulting in an area of say the Biceps, being controlled by the Median Nerve (in the intact limb, the Median Nerve supplied finger and wrist flexors). A muscle contraction occurs in the graft area of the Biceps when the subject attempts to close his hand. A myo-control site is added if the subject can isolate the contraction from that of the Biceps muscle served by the Musculocutaneous Nerve distribution.
Type
Other article
Subject
occupational therapy
nerve transfer surgery
Permalink
https://hdl.handle.net/10161/2748
Citation
Proceedings of the MEC’05 conference, UNB; 2005.
Collections
More Info
Show full item record