CONTROLLING POWERED UPPER EXTREMITY PROSTHESES NOW AND IN THE FUTURE 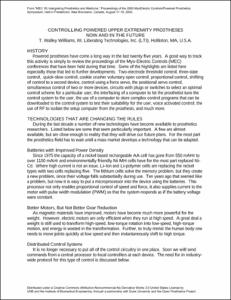 View / Download
247.1 Kb
Date
Author
Williams, T. Walley III
Repository Usage Stats
367
views
1,098
downloads
Abstract
Powered prostheses have come a long way in the last twenty five years. A good way to track this activity is simply to review the proceedings of the Myo-Electric Controls (MEC) conferences that have been held during that time. Some of the highlights are listed here especially those that led to further developments. Two-electrode threshold control, three-state control, quick-slow control, cookie crusher voluntary open control, proportional control, shifting of control to a second device, control using a force servo, the positional servo control, simultaneous control of two or more devices, circuits with plugs or switches to select an optimal control scheme for a particular user, the interfacing of a computer to let the prosthetist tune the control system to the user, the use of a computer to store complex control programs that can be downloaded to the control system to test their suitability for the user, voice activated control, the use of RF to isolate the setup computer from the prosthesis, and much more.
Type
Other article
Subject
upper extremity prosthetics
Permalink
https://hdl.handle.net/10161/2757
Citation
Proceedings of the MEC’05 conference, UNB; 2005.
Collections
More Info
Show full item record