PROSTHESES CONTROL BASED ON TMR 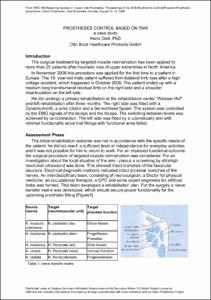 View / Download
433.3 Kb
Date
Author
Dietl, Hans
Repository Usage Stats
444
views
658
downloads
Abstract
The surgical treatment by targeted muscle reinnervation has been applied to more than 25 patients after traumatic loss of upper extremities in North America. In November 2006 this procedure was applied for the first time to a patient in Europe. The 18- year-old male patient suffered from bilateral limb loss after a high voltage accident, which happened in October 2006. The patient ended up with a medium long transhumeral residual limb on the right side and a shoulder disarticulation on the left side. He did undergo a primary rehabilitation at the rehabilitation center "Weisser Hof" and left rehabilitation after three months. The right side was fitted with a DynamicArm®, a wrist rotator and a SensorHand Speed. The system was controlled by the EMG signals of the biceps and the triceps. The switching between levels was achieved by co-contraction. The left side was fitted by a cosmetically arm with minimal functionality since trial fittings with functional arms failed.
Type
Other article
Subject
prosthesis control
TMR
Permalink
https://hdl.handle.net/10161/2765
Citation
Proceedings of the MEC’08 conference, UNB; 2008.
Collections
More Info
Show full item record