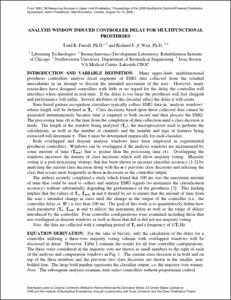 View / Download
401.1 Kb
Date
Authors
Farrell, Todd
Weir, Richard F.
Repository Usage Stats
496
views
461
downloads
Abstract
Many upper-limb, multifunctional prosthesis controllers analyze fixed segments of EMG data collected from the residual musculature in an attempt to discern the intended movement of the user. However, many researchers have designed controllers with little or no regard for the delay the controller will introduce when operated in real-time. If the delay is too large the prosthesis will feel sluggish and performance will suffer. Several attributes of the classifier affect the delay it will create. State-based pattern recognition classifiers typically collect EMG data in ‘analysis windows’ whose length will be defined as Ta. Class decisions based upon these collected data cannot be generated instantaneously because time is required to both record and then process the EMG. The processing time ( ) is the time from the completion of data collection until a class decision is made. The length of the window being analyzed (Ta), the microprocessor used to perform the calculations, as well as the number of channels and the number and type of features being extracted will determine . Thus must be determined empirically for each classifier. Both overlapped and disjoint analysis windows have been employed in experimental prosthesis controllers. Windows can be overlapped if the analysis windows are incremented by some amount of time (Tnew) that is greater than the processing time ( ). Overlapping the windows increases the density of class decisions which will allow majority voting. Majority voting is a post-processing strategy that has been shown to increase classifier accuracy [1-2] by analyzing the current class decision along with the n-1 previous class decisions and selecting the class that occurs most frequently in those n decisions as the controller output. The authors recently completed a study which found that 100 ms was the maximum amount of time that could be used to collect and analyze EMG signals (to maximize the classification accuracy) without substantially degrading the performance of the prosthesis [3]. This finding implies that the values of Ta, Tnew, n and should be set to ensure that the amount of time from the user’s intended change in class until the change in the output of the controller (i.e., the controller delay or ‘D’) is less than 100 ms. The goal of this work is to quantitatively define how each parameter (Ta, Tnew, n and ) affects the maximum delay as well as the range of delays introduced by the controller. Four controller configurations were examined including those that use overlapped or disjoint windows as well as those that did or did not use majority voting. Note: the data are collected with a sampling period of Ts and a frequency of 1/Ts Hz.
Type
Other article
Subject
Controller Delay
Multi-functional Prostheses
Permalink
https://hdl.handle.net/10161/2773
Citation
Proceedings of the MEC’08 conference, UNB; 2008.
Collections
More Info
Show full item record