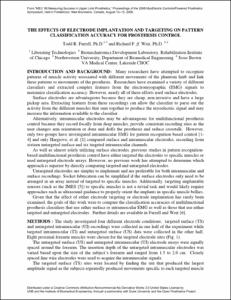 View / Download
1.2 Mb
Date
Authors
Farrell, Todd
Weir, Richard F.
Repository Usage Stats
472
views
259
downloads
Abstract
Many researchers have attempted to recognize patterns of muscle activity associated with different movements of the phantom limb and link these patterns to movements of the prosthesis. Researchers have examined a variety of different classifiers and extracted complex features from the electromyographic (EMG) signals to maximize classification accuracy. However, nearly all of these efforts used surface electrodes. Surface electrodes are advantageous because they are cheap, non-invasive and have a large pickup area. Extracting features from these recordings can allow the classifier to parse out the activity from the different muscles that sum together to produce the myoelectric signal and may increase the information available to the classifier. Alternatively, intramuscular electrodes may be advantageous for multifunctional prosthesis control because they record focally from deep muscles, provide consistent recording sites as the user changes arm orientation or dons and doffs the prosthesis and reduce crosstalk. However, only two groups have investigated intramuscular EMG for pattern recognition based control [1- 4] and only Hargrove, et al. [1] compared surface and intramuscular electrodes, recording from sixteen untargeted surface and six targeted intramuscular channels. As well as almost solely utilizing surface electrodes, previous studies in pattern recognitionbased multifunctional prosthesis control have either targeted the electrodes to specific muscles or used untargeted electrode arrays. However, no previous work has attempted to determine which approach is superior by directly comparing targeted and untargeted electrodes. Untargeted electrodes are simpler to implement and are preferable for both intramuscular and surface recordings. Socket fabrication can be simplified if the surface electrodes only need to be arranged in an array instead of targeted to specific muscles. Additionally, targeting implantable sensors (such as the IMES [5]) to specific muscles is not a trivial task and would likely require approaches such as ultrasound guidance to properly orient the implants in specific muscle bellies. Given that the effect of either electrode targeting or electrode implantation has rarely been examined, the goals of this work were to compare the classification accuracies of multifunctional prosthesis classifiers that use either surface or intramuscular EMG as well as those that use either targeted and untargeted electrodes. Further details are available in Farrell and Weir [6].
Type
Other article
Subject
Electrode Implantation
Prosthesis Control
Permalink
https://hdl.handle.net/10161/2774
Citation
Proceedings of the MEC’08 conference, UNB; 2008.
Collections
More Info
Show full item record