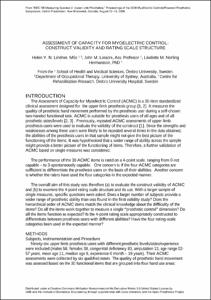 View / Download
249.6 Kb
Date
Authors
Lindner, Helen Y. N.
Linacre, John M.
Norling Hermansson, Liselotte M.
Repository Usage Stats
1,338
views
528
downloads
Abstract
The Assessment of Capacity for Myoelectric Control (ACMC) is a 30-item standardized clinical assessment designed for the upper limb prosthesis group [1, 2]. It measures the quality of prosthetic hand movement performed by the prosthesis user during a self-chosen two-handed functional task. ACMC is suitable for prosthesis users of all ages and of all prosthetic sides/levels [2, 3] . Previously, repeated ACMC assessments of upper limb prosthesis users were used to evaluate the validity of the construct [1]. Since the strengths and weaknesses among these users were likely to be repeated several times in the data obtained, the abilities of the prosthesis users in that sample might not give the best picture of the functioning of the items. It was hypothesised that a wider range of ability across the sample might provide a better picture of the functioning of items. Therefore, a further validation of ACMC based on single measures was considered. The performance of the 30 ACMC items is rated on a 4-point scale, ranging from 0-not capable – to 3-spontaneously capable. One concern is if the four ACMC categories are sufficient to differentiate the prosthesis users on the basis of their abilities. Another concern is whether the raters have used the four categories in the expected manner. The overall aim of this study was therefore (a) to evaluate the construct validity of ACMC and (b) to examine the 4-point rating scale structure and its use. With a larger sample of single measures, specific questions were asked: Does a larger number of subjects provide a wider range of prosthetic ability than was found in the first validity study? Does the hierarchical order of ACMC items match the clinical knowledge about the difficulty of the items? Do all the items work together to measure a single “prosthetic control” dimension? Do all the items function as expected? Is the 4-point rating scale appropriately constructed to differentiate between prosthesis users with different abilities? Have the four rating-scale categories been used in the expected manner?
Type
Other article
Subject
myoelectric control
Permalink
https://hdl.handle.net/10161/2793
Citation
Proceedings of the MEC’08 conference, UNB; 2008.
Collections
More Info
Show full item record