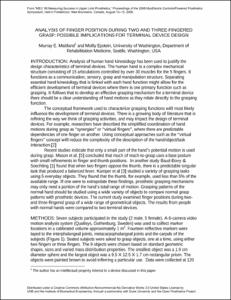 View / Download
473.7 Kb
Date
Authors
Maitland, Murray E.
Epstein, Molly
Repository Usage Stats
394
views
494
downloads
Abstract
Analysis of human hand kinesiology has been used to justify the design characteristics of terminal devices. The human hand is a complex mechanical structure consisting of 15 articulations controlled by over 30 muscles for the 5 fingers. It functions as a communication, sensory, grasp and manipulation structure. Separating essential hand kinesiology that is linked with each hand function might allow for the efficient development of terminal devices where there is one primary function such as grasping. It follows that to develop an effective grasping mechanism for a terminal device there should be a clear understanding of hand motions as they relate directly to the grasping function. The conceptual framework used to characterize grasping functions will most likely influence the development of terminal devices. There is a growing body of literature that is refining the way we think of grasping activities, and may impact the design of terminal devices. For example, researchers have described the simplified coordination of hand motions during grasp as “synergies” or “virtual fingers”, where there are predictable dependencies of one finger on another. Using conceptual approaches such as the “virtual fingers” concept will reduce the complexity of the description of the hand/object/task interaction
Type
Other article
Subject
Finger position
hand prosthesis
Permalink
https://hdl.handle.net/10161/2797
Citation
Proceedings of the MEC’08 conference, UNB; 2008.
Collections
More Info
Show full item record