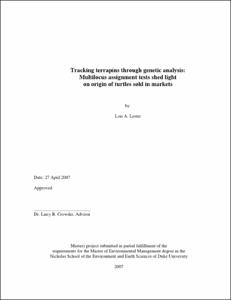 View / Download
406.3 Kb
Date
Author
Lester, Lori A.
Advisor
Crowder, Larry B
Repository Usage Stats
323
views
227
downloads
Abstract
Diamondback terrapins (Malaclemys terrapin) are currently sold for human consumption in many large cities in the United States. Some Asian cultural groups utilize large numbers of terrapins, both regionally and world-wide, as a protein source. Terrapin populations face many prevalent problems including predation by both native and non-native predators, and anthropogenic disturbances (such as habitat destruction, roadkill, and bycatch in blue crab traps). The additional anthropogenic dilemma of terrapins sold in fish markets is particularly troubling when added to the long list of widespread disturbances. Terrapin harvesting is restricted in each state throughout the Atlantic and Gulf coastal range of the species; however, enforcement of these restrictions is weak. The objective of our study was to determine the origin of terrapins sold in New York City’s Fulton Fish Market. In 2004, we collected blood samples from 63 individual terrapins confiscated from illegal sellers in the Market. Some of these terrapins were released off the coast of Maryland, based on the belief that the terrapins were originally harvested in the Chesapeake Bay. In this study, we used microsatellite DNA variation to test the hypothesis that M. terrapin collected in the Market are from the Coastal Mid-Atlantic terrapin metapopulation. We extracted DNA from blood samples, performed PCR, and screened each turtle at 12 polymorphic microsatellite DNA loci developed for bog turtles (Glyptemys muhlenbergii). Statistical analyses relied on assignment tests to determine the most likely region of origin for each terrapin to the metapopulation and subpopulation level. Many of the terrapins were assigned to the Chesapeake Bay metapopulation (or subpopulations in Maryland); however, some terrapins were assigned to the Coastal Mid-Atlantic or the Coastal Carolina region. Rules and regulations (and the enforcement of these rules) need to be improved to adequately protect terrapins from direct harvest.
Type
Master's project
Department
Nicholas School of the Environment and Earth Sciences
Subject
Diamondback terrapins (Malaclemys terrapin)
Fulton Fish Market, New York City
Microsatellite DNA
Bog turtles (Glyptemys muhlenbergii)
Permalink
https://hdl.handle.net/10161/280
Citation
Lester, Lori A. (2007). Tracking terrapins through genetic analysis: Multilocus assignment tests shed light on origin of turtles sold in markets. Master's project, Duke University. Retrieved from https://hdl.handle.net/10161/280.
Collections
More Info
Show full item record