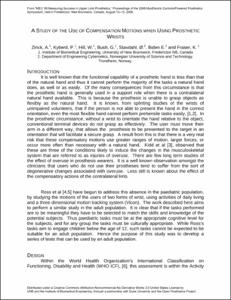 View / Download
241.8 Kb
Date
Authors
Zinck, A.
Kyberd, P.
Hill, W.
Bush, G.
Stavdahl, Ø.
Biden, E.
Fraser, K.
Repository Usage Stats
547
views
312
downloads
Abstract
It is well known that the functional capability of a prosthetic hand is less than that of the natural hand and thus it cannot perform the majority of the tasks a natural hand does, as well or as easily. Of the many consequences from this circumstance is that the prosthetic hand is generally used in a support role when there is a contralateral natural hand available. This is because the prosthesis is unable to grasp objects as flexibly as the natural hand. It is known, from splinting studies of the wrists of unimpaired volunteers, that if the person is not able to present the hand in the correct orientation, even the most flexible hand cannot perform prehensile tasks easily, [1,2]. In the prosthetic circumstance, without a wrist to orientate the hand relative to the object, conventional terminal devices do not grasp as effectively. The user must move their arm in a different way, that allows the prosthesis to be presented to the target in an orientation that will facilitate a secure grasp. A result from this is that there is a very real risk that these compensatory motions use greater ranges of motion, larger forces, or occur more often than necessary with a natural hand. Kidd et al [3], observed that these are three of the conditions likely to induce the changes in the musculoskeletal system that are referred to as injuries of overuse. There are few long term studies of the effect of overuse in prosthesis wearers. It is a well known observation amongst the clinicians that users who do not use their prostheses tend to suffer from the sort of degenerative changes associated with overuse. Less still is known about the effect of the compensatory actions of the contralateral limb.
Type
Other article
Subject
wrist prosthetics
Permalink
https://hdl.handle.net/10161/2827
Citation
Proceedings of the MEC’08 conference, UNB; 2008.
Collections
More Info
Show full item record