Intertwining Narratives: The Copts and their Muslim Relations 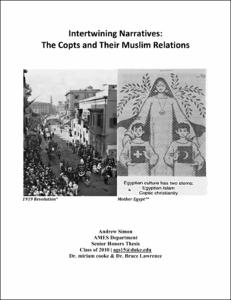 View / Download
8.4 Mb
Date
Author
Simon, Andrew
Repository Usage Stats
486
views
4,225
downloads
Abstract
Coptic-Muslim relations are often portrayed in black-and-white binaries. The Copts are the oppressed minority, whereas the Muslims are the aggressive majority; the Copts are practitioners of a subservient faith, while the Muslims are followers of a superior doctrine; the Copts are loyal to the cross rather than the nation-state, and only the Muslims are fit to rule in a country where Islam is the official religion. These highly problematic discourses are traced and critiqued throughout three major narratives: polemics in popular culture, the British policy of “define and conquer,” and the efforts of iCopts to engage and empower their coreligionists from abroad. Only by intertwining these narratives and unveiling the polemical pitfalls that line Coptic-Muslim discourse is a greater understanding of the Copts and their relations with Muslims possible.
Description
Winner of the 2010 Robert F. Durden Honors Thesis Prize
Type
Honors thesis
Department
Asian and Middle Eastern Studies
Permalink
https://hdl.handle.net/10161/2839
Citation
Simon, Andrew (2010). Intertwining Narratives: The Copts and their Muslim Relations. Honors thesis, Duke University. Retrieved from https://hdl.handle.net/10161/2839.
Collections
More Info
Show full item record