Burning a hole in the budget: tobacco spending and its crowd-out of other goods. 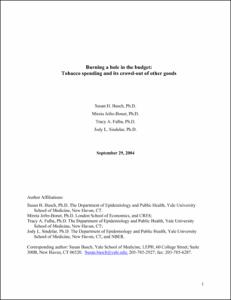 View / Download
392.1 Kb
Date
Authors
Busch, Susan H
Jofre-Bonet, Mireia
Falba, Tracy A
Sindelar, Jody L
Repository Usage Stats
386
views
827
downloads
Abstract
Smoking is an expensive habit. Smoking households spend, on average, more than $US1000 annually on cigarettes. When a family member quits, in addition to the former smoker's improved long-term health, families benefit because savings from reduced cigarette expenditures can be allocated to other goods. For households in which some members continue to smoke, smoking expenditures crowd-out other purchases, which may affect other household members, as well as the smoker. We empirically analyse how expenditures on tobacco crowd-out consumption of other goods, estimating the patterns of substitution and complementarity between tobacco products and other categories of household expenditure. We use the Consumer Expenditure Survey data for the years 1995-2001, which we complement with regional price data and state cigarette prices. We estimate a consumer demand system that includes several main expenditure categories (cigarettes, food, alcohol, housing, apparel, transportation, medical care) and controls for socioeconomic variables and other sources of observable heterogeneity. Descriptive data indicate that, comparing smokers to nonsmokers, smokers spend less on housing. Results from the demand system indicate that as the price of cigarettes rises, households increase the quantity of food purchased, and, in some samples, reduce the quantity of apparel and housing purchased.
Type
Journal article
Subject
Adult
Budgets
Costs and Cost Analysis
Data Collection
Family Characteristics
Female
Humans
Male
Models, Economic
Smoking
United States
Permalink
https://hdl.handle.net/10161/2862
Collections
More Info
Show full item record

Visiting Assistant Professor of Economics
This author no longer has a Scholars@Duke profile, so the information shown here reflects their Duke status at the time this item was deposited.