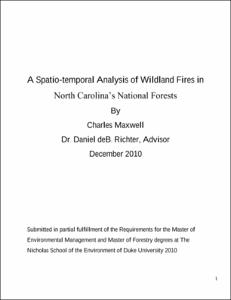 View / Download
1.3 Mb
Date
Author
Maxwell, Charles
Advisor
Richter, Daniel
Repository Usage Stats
206
views
227
downloads
Abstract
Previous research suggests that humans are responsible for a significant majority of wildland fires, and that those fires are not randomly distributed on the landscape. Nearly 98% of all fire starts on North Carolina private lands are human caused and almost 90% of fire starts across the country are human related. A data set was compiled of daily fire and weather observations from 1970 to 2008, as well as four decades of county level census information. The number of fires per year for North Carolina's Nantahala, Pisgah and Croatan National Forests range from 42 to 425 (mean: 106; standard deviation: 74). These fires burn an average of 2,800 acres (standard deviation: 1,700). These data were used in order to assess the hypothesis that fires are most likely to occur during drier months and near forest roads. Several methodologies were used in order to understand the occurrence of fires and the results of this research are to inform fire managers about places in space and time that are particularly prone to fire. It was found that wildland fires in North Carolina have a bi-modal distribution during the year, with a local maximum in November and a global maximum in April. A time-series analysis of the data indicated that fires are correlated in time and confirmed this seasonality. Regression analysis showed that specific climate variables were significant in explaining the number of fires. The climate variables that were found to be most significant were temperature, which had a positive correlation with the number of fires and relative humidity, which had a negative correlation. Precipitation and wind speed were found significant in some, but not all cases. In addition, certain counties had higher incidence of wildland fire. In contrast, Buncombe county had the fewest and Graham the most wildland fires; Buncombe county has the largest population and most development, while Graham had the smallest population and highest amount acreage under National Forest control. A spatial analysis found that approximately half of human started wildland fires were within 100m of a road or trail, and nearly all fires were within 1000m.
Type
Master's project
Department
Nicholas School of the Environment and Earth Sciences
Subject
Wildland Fires
Permalink
https://hdl.handle.net/10161/2874
Citation
Maxwell, Charles (2010). A Spatio-temporal Analysis of Wildland Fires in North Carolina's National Forests. Master's project, Duke University. Retrieved from https://hdl.handle.net/10161/2874.
Collections
More Info
Show full item record