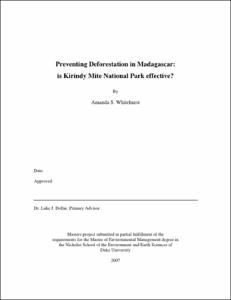 View / Download
2.3 Mb
Date
Author
Whitehurst, Amanda S.
Advisor
Dollar, Luke J.
Repository Usage Stats
614
views
1,993
downloads
Abstract
Madagascar, one of the world’s biodiversity hotspots, is losing habitat of native species at an alarming rate. Frequently overlooked by researchers, dry deciduous forests have been destroyed by logging and fires for subsistence agriculture. Kirindy Mite National Park encompasses one of the largest continuous tracts of dry forest in Madagascar. However, the current state of the Park is largely unknown by the Association Nationale pour la Gestion des Aires Protégées (ANGAP) managers in Morondava due to lack of funding and technology, an issue faced by many park managers in developing countries. In order to assess whether the Park is preventing deforestation within its boundaries and if the disturbed forest within the Park was rebounding, satellite images from 1990, 2000, and 2006 were used to map forest cover within the Park and a 5km buffer outside the Park. Comparisons of deforestation and afforestation rates between the Park and buffer were used to gauge the effectiveness of the Park for forest conservation. Overall, the boundary or knowledge of it plays a role in deterring anthropogenic deforestation with Kirindy Mite. However, this and the remoteness of the Park were not enough to completely prevent the Park from losing forest cover from 1990 to 2006.
Type
Master's project
Department
Nicholas School of the Environment and Earth Sciences
Subject
Madagascar
Deforestation
Kirindy Mitea National Park
Association Nationale pour la Gestion des Aires Protégées (ANGAP)
Park Management
Permalink
https://hdl.handle.net/10161/288
Citation
Whitehurst, Amanda S. (2007). Preventing Deforestation in Madagascar: is Kirindy Mite National Park effective?. Master's project, Duke University. Retrieved from https://hdl.handle.net/10161/288.
Collections
More Info
Show full item record