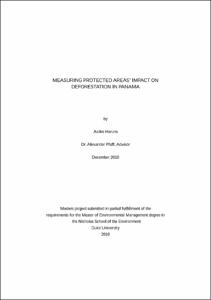 View / Download
412.0 Kb
Date
Author
Haruna, Akiko
Advisor
Pfaff, Alexander
Repository Usage Stats
567
views
1,529
downloads
Abstract
Throughout the last century, protected areas (PAs) have been the major policy instrument for forest conservation worldwide, as well as in the Republic of Panama. The country has strived to lower the decline in its tropical forest cover which is rich in biodiversity. The importance of evaluating existing forest policies has been increasing, especially with emergence of financial incentives given to mitigation of deforestation. Few studies, however, have examined the effectiveness of forest policies in Panama, including the adoption of PAs. This study evaluates the impact of PAs on deforestation rates in Panama through the use of matching methods. The methods are used to adjust observable selection bias of PAs location. The conventional evaluation methods for protected areas failed to consider such bias, thus results using matching methods were expected to give less distorted estimates of the impact. Two types of matching methods were applied to obtain the estimated impacts of PAs, namely propensity score matching and covariate matching. The results were compared with those from the conventional evaluation methods. Countrywide forested plots in two time periods, 1992-2000, and 2000-2005 were examined. The results indicated positive effects of PAs on prevention of deforestation. They also revealed that conventional evaluation methods overestimated the impact of PAs. Such results agree with the previous matching analysis done for other geographic regions. It seems that the magnitude of the impact was enhanced in areas where high deforestation pressure existed. There was an indication of a geographical shift of deforestation frontiers toward remote areas with time. Bias-adjusted estimates for evaluation of PAs will be critical for formulation of future policy. With PAs being effective in avoiding deforestation, the future focus should be on where to put major resources for protection. As deforestation drivers make the deforestation frontier shift geographically, PAs will need to meet needs of covering forests under large threat in the present and the future.
Type
Master's project
Department
Nicholas School of the Environment and Earth Sciences
Subject
deforestation
forest conservation
policy evaluation
Panama
protected area
tropical forest
Permalink
https://hdl.handle.net/10161/2880
Citation
Haruna, Akiko (2010). Measuring protected areas’ impact on deforestation in Panama. Master's project, Duke University. Retrieved from https://hdl.handle.net/10161/2880.
Collections
More Info
Show full item record