THE MISSING LINK: GREENHOUSE GAS EMISSIONS TRADING BETWEEN THE EUROPEAN UNION AND THE UNITED STATES? 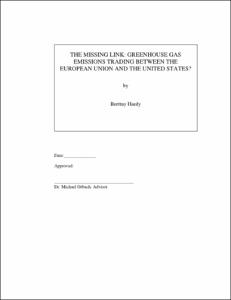 View / Download
193.3 Kb
Date
Author
Hardy, Brettny
Advisor
Orbach, Michael
Repository Usage Stats
261
views
560
downloads
Abstract
This paper uses existing literature on economic, political, and legal issues surrounding market linkages to analyze the possibility of linking two specific greenhouse gas trading markets: the Regional Greenhouse Gas Initiative in the Northeastern United States and the European Union Emissions Trading System. The opportunity to connect trading systems between the European Union and the United States might be beneficial for both programs because it could create a bigger market and lower costs, while at the same time taking a large international step forward in the process of developing a global greenhouse gas trading market. In order to allow trading from one program to another, however, a link would need to pass constitutional muster. In general, the federal government has the authority to address foreign policy. A link between RGGI and the EU would need to be as informal and private as possible in order to avoid stepping into federal territory. Furthermore, there are practical considerations that would need to be addressed. Although the cap-and-trade systems in the EU and the United States share many similar features, there are some important differences between the two programs. Creating a link that would be economically and politically salient might require negotiations between RGGI and the EU. Negotiations could greatly implicate constitutional principles, like the dormant foreign relations power, causing linkage to become legally problematic. RGGI and the EU need to keep in mind important legal issues in designing any connection between their trading programs.
Type
Master's project
Department
Nicholas School of the Environment and Earth Sciences
Subject
Regional Greenhouse Gas Initiative
European Union Emissions Trading System
Global Greenhouse Trading Market
Permalink
https://hdl.handle.net/10161/289
Citation
Hardy, Brettny (2007). THE MISSING LINK: GREENHOUSE GAS EMISSIONS TRADING BETWEEN THE EUROPEAN UNION AND THE UNITED STATES?. Master's project, Duke University. Retrieved from https://hdl.handle.net/10161/289.
Collections
More Info
Show full item record