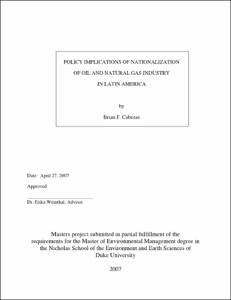 View / Download
586.0 Kb
Date
Author
Cabezas, Brian F.
Advisor
Weinthal, Erika
Repository Usage Stats
2,727
views
2,998
downloads
Abstract
Nationalization is a particular type of organizational structure where the state or nation controls the industry as opposed to private companies or multinational organizations. If one imagines a continuum of organizational structure, nationalization and privatization would be at opposite ends. Nationalization could include joint ventures where the state controls the industry but allows for private companies to participate in the resource extraction and retain some of the profit. Within the past few years, Venezuela and Bolivia have announced plans to renationalize their oil and natural gas industry. The first part of this project seeks to perform a qualitative analysis to discern the common characteristics of a nationalized country focusing specifically on four countries – Bolivia, Venezuela, Mexico and Nigeria. There are various components influencing the efficiency of a nationalized industry including civil society, regionalism, and reliance on oil. The main findings were that a nationalized country with a high reliance on oil or natural gas and weak financial institutions will have an authoritarian form of government, and that there will likely be more incidences of Latin American countries nationalizing in the near future if oil prices remain high. The project also performs a quantitative analysis on indirect measures of efficiency using subsidies and also analyzes the effect of nationalization on social development using the Gini coefficient (a measure of income equality) and public spending on education. Nationalization is found to have a positive effect on income equality and a negative effect on public spending on education. The project culminates with policy recommendations specifically focused on the four selected countries with implications for broader applications. The main objectives of the recommendations are to strengthen financial institutions, diversify the economy, and increase transparency and accountability of the industry.
Type
Master's project
Department
Nicholas School of the Environment and Earth Sciences
Subject
Nationalization
Venezuela
Bolivia
Mexico
Nigeria
Oil
Natural Gas
Permalink
https://hdl.handle.net/10161/290
Citation
Cabezas, Brian F. (2007). POLICY IMPLICATIONS OF NATIONALIZATION OF OIL AND NATURAL GAS INDUSTRY IN LATIN AMERICA. Master's project, Duke University. Retrieved from https://hdl.handle.net/10161/290.
Collections
More Info
Show full item record