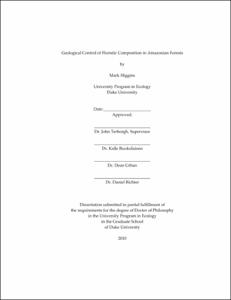 Amazonia contains the largest remaining tracts of undisturbed tropical forest on earth, and is thus critical to international nature conservation and carbon sequestration efforts. Amazonian forests are notoriously difficult to study, however, due to their species richness and inaccessibility. This has limited efforts to produce the accurate, high-resolution biodiversity maps needed for conservation and development. The aims of the research described here were to identify efficient solutions to the problems of tropical forest inventory; to use these methods to identify floristic patterns and their causes in western Amazonia; and propose new means to map floristic patterns in these forests.

Using tree inventories in the vicinity of Iquitos, Peru, I and a colleague systematically evaluated methods for rapid tropical forest inventory. Of these, inventory of particular taxonomic groups, or taxonomic scope inventory, was the most efficient, and was able to capture a majority of the pattern observed by traditional inventory techniques with one-fifth to one-twentieth the number of stems and species. Based on the success of this approach, I and colleagues specifically evaluated two plant groups, the Pteridophytes (ferns and fern allies) and the Melastomataceae (a family of shrubs and small trees), for use in rapid inventory. Floristic patterns based on inventories from either group were significantly associated with those based on the tree flora, and inventories of Pteridophytes in particular were in most cases able to capture the majority of floristic patterns identified by tree inventories. These findings indicate that Pteridophyte and Melastomataceae inventories are useful tools for rapid tropical forest inventory.

Using Pteridophyte and Melastomataceae inventories from 138 sites in northwestern Amazonia, combined with satellite data and soil sampling, I and colleagues studied the causes of vegetation patterns in western Amazonian forests. On the basis of these data, we identified a floristic discontinuity of at least 300km in northern Peru, corresponding to a 15-fold difference in soil cation concentrations and an erosion-generated geological boundary. On the basis of this finding, we assembled continent-scale satellite image mosaics, and used these to search for additional discontinuities in western Amazonia. These mosaics indicate a floristic and geological discontinuity of at least 1500km western Brasil, driven by similar erosional processes identified in our study area. We suggest that this represents a chemical and ecological boundary between western and central Amazonia.

Using a second network of 52 pteridophyte and soil inventories in northwestern Amazonia, we further studied the role of geology in generating floristic pattern. Consistent with earlier findings, we found that two widespread geological formations in western Amazonia differ eight-fold difference in soil cation concentrations and in a majority of their species. Difference in elevation, used as a surrogate for geological formation, furthermore explained up to one-third of the variation in plant species composition between these formations. Significant correlations between elevation, and cation concentrations and soil texture, confirmed that differences in species composition between these formations are driven by differences in soil properties. On the basis of these findings, we were able to use SRTM elevation data to accurately model species composition throughout our study area.

I argue that Amazonian forests are partitioned into large-area units on the basis of geological formations and their edaphic properties. This finding has implications for both the ecology and evolution of these forests, and suggests that conservation strategies be implemented on a region-by-region basis. Fortunately, the methods described here provide a means for generating accurate and detailed maps of floristic patterns in these vast and remote forests.