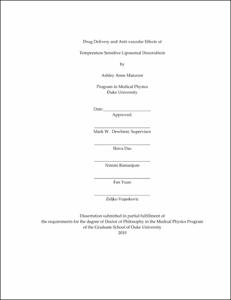 Traditionally, the goal of nanoparticle-based chemotherapy has been to decrease normal tissue toxicity by improving drug specificity to tumor. Relying on the EPR effect (Enhanced Permeability and Retention), a host of nanoparticles (from micelles and dendrimers to liposomes and lipidic nanoparticles) have been developed and tested for passive accumulation into tumor interstitium. Unfortunately, most nanoparticles achieve only suboptimal drug delivery to tumors, due to heterogeneity of tumor vessel permeability, limited nanoparticle penetration, and relatively slow drug release. However, recent developments in nanoparticle technology have occurred with the design and testing of a fast drug-releasing liposome triggered by local heat. This temperature-sensitive liposome formulation loaded with doxorubicin (Dox-TSL) has already shown substantial anti-tumor efficacy and is currently in clinical trials.

Previous pre-clinical work to understand the mechanism of efficacy has illustrated increases in overall drug concentration in the tumor, and an anti-vascular effect not observed with heat alone. These initial studies have also suggested that these liposomes may be the most efficacious when they are injected into a pre-heated tumor, with the hypothesis that in this treatment scheme the liposomes may be releasing inside the tumor vasculature. However, whether intravascular release is indeed occurring, and the subsequent implications this paradigm change in drug delivery could have are still unanswered questions.

The experiments presented herein aimed to investigate two effects: the existence and influence of intravascular drug release on drug delivery and distribution within the tumor, and the effect of drug delivery on subsequent anti-vascular effects. To investigate drug delivery, two mouse models were used. Dorsal window chambers implanted with FaDu human squamous carcinomas were used with real-time intravital confocal microscopy to evaluate time-resolved delivery of doxorubicin and liposome extravasation over the first 20 minutes of treatment. As a complimentary mouse model, flank FaDu tumors were also treated with Dox-TSL or treatment controls (doxorubicin with and without heat and Doxil with heat), and subsequently sectioned and histologicaly imaged to evaluate drug delivery and penetration depth, as well as impact on hypoxia and perfusion parameters. To investigate vascular effects, a GFP-eNos transgenic mouse model was used, also with window chamber confocal microscopy, to evaluate morphological changes occurring in the tumor vasculature following treatment.

The results presented herein demonstrate that contrary to the traditional liposome paradigm of extravasation and subsequent drug release, thermally sensitive liposomes release drug inside the tumor vasculature, and that the released free drug diffuses into the tumor interstitium. Real-time confocal imaging of doxorubicin delivery to murine tumor window chambers illustrates that intravascular drug release provides a mechanism to increase both the time that tumor cells are exposed to maximum drug levels and the penetration distance achievable by free drug diffusion. Histological analysis further confirms this finding, illustrating that drug delivered with Dox-TSL intravascular release can result in drug penetration levels up to 80 µm from vessels, in comparison with 40 µm achievable with free drug with heat. Further, Dox-TSL delivers drug to a higher percentage of a tumor's hypoxic area than possible with free drug with or without heat. Endothelial cells display marked morphological changes apparent immediately following treatment, with significant vascular destruction at 6 hours. However, heat had a similar influence on vascular morphology, underscoring the complexity of the anti-vascular effect, particularly in the more sensitive vasculature of a mouse model compared with reported human vascular heat tolerances. This work establishes intravascular release as a new paradigm in drug delivery to solid tumors, resulting in improved drug bioavailability, penetration depth, and enhanced delivery of drug to hypoxic regions of tumors.