Dreams of a Tropical Canada: Race, Nation, and Canadian Aspirations in the Caribbean Basin, 1883-1919 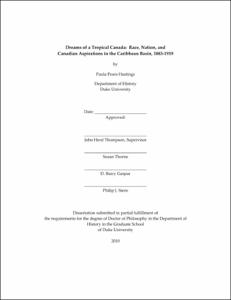 Dreams of a "tropical Canada" that included the West Indies occupied the thoughts of many Canadians over a period spanning nearly forty years. From the expansionist fever of the late nineteenth century to the redistribution of German territories immediately following the First World War, Canadians of varying backgrounds campaigned vigorously for Canada-West Indies union. Their efforts generated a transatlantic discourse that raised larger questions about Canada's national trajectory, imperial organization, and the state of Britain's Empire in the twentieth century.

This dissertation explores the key ideas, tensions, and contradictions that shaped the union discourse over time. Race, nation and empire were central to this discourse. Canadian expansionists' efforts to gain free access to tropical territory, consolidate British possessions in the Western hemisphere, and negotiate the terms under which West Indians of color would enter the Canadian federation reflected and perpetuated logics that were simultaneously racial, national, and imperial.

Canada-West Indies union campaigns raise important questions about the processes at work in the ideological and material formation of the Canadian "nation" in the late nineteenth and early twentieth century. Employing a wide range of public and private manuscript material, diaries, travelogues and newspapers, this dissertation argues that Canadians' expansionist aspirations in the West Indies were inextricably connected to a national vision. To the campaign's advocates, acquiring colonial satellites - particularly in tropical regions - was a defining feature of nation-state formation.