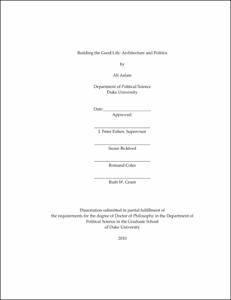 This dissertation examines the relationship between architecture and democratic politics in late-modernity. It identifies the refusal of architects to consider the political dimensions of their work following the failures of 20th century High Modernism and the scant attention that the intersection between architecture and politics has received from political theorists as a problem. In order to address these deficiencies, the dissertation argues for the continued impact of architecture and urban planning on modern subject formation, ethics, and politics under the conditions of de-centralized sovereignty that characterize late-modernity. Following an opening chapter which establishes the mutual relation architectural design and political culture in the founding text of political science, Aristotle's Politics, the dissertation offers a genealogical critique of modern architectural design and urban planning practices. It concludes that modern architecture shapes individual and collective political possibilities and a recursive relationship exists between the spaces "we" inhabit and the people that "we" are. In particular, it finds that there is a strong link between practices of external circulation and the interior circulation of thoughts about the self and others. The dissertation concludes by proposing a new understanding of architecture that dynamically relates the design of material structures and the forms of political practices that those designs facilitate. This new definition of architecture combines political theorist Hannah Arendt's concept of "world-building action" with the concept of the "threshold" developed and refined by Dutch architects Aldo van Eyck and Herman Hertzberger.