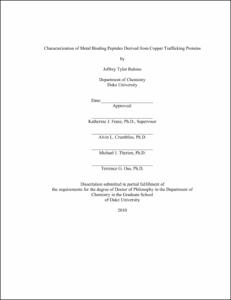 Copper was first released into the environment as the result of the mass generation of oxygen from photosynthetic bacteria roughly 2.7 billion years ago. While it proved to be poisonous to early life on Earth, those that met the evolutionary challenge utilized the metal as a cofactor in enzymes to perform biochemically significant functions, while controlling intracellular levels of copper with a sophisticated network of trafficking proteins. Proteins and enzymes that utilize copper as a cofactor have evolved significantly different coordination environments than copper trafficking proteins, as a result of the different functions they perform. Of particular interest was characterizing the unique Cu(I) binding events observed in some of these proteins, the extracellular N-terminal regions of eukaryotic high affinity copper transport proteins (Ctr), and the bacterial periplamsic CusF protein of the CusFBCA Cu(I)/Ag(I) efflux pathway.