Cities of Comrades: Urban Disasters and the Formation of the North American Progressive State 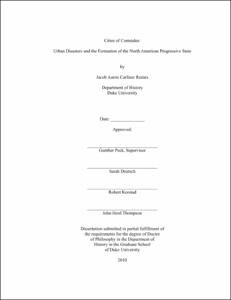 A fire in Salem, Mass., in 1914 and an explosion in Halifax, N.S., in 1917 provide an opportunity to explore working-class institutions and organizations in the United States-Canada borderlands. In a historical moment in which the state greatly expanded its responsibility to give protection and rescue to its citizens, after these two disasters ordinary survivors preferred to depend on their friends, neighbors, and family members. This dissertation examines which institutions--including formal organizations like unions and fraternal societies as well as informal groups like families and neighborhoods--were most relevant and useful to working-class survivors. Families, neighbors, friends, and coworkers had patterns and traditions of self-help, informal order, and solidarity that they developed before crisis hit their cities. Those traditions were put to unusual purposes and extreme stress when the disasters happened. They were also challenged by new agents of the state, who were given extraordinary powers in the wake of the disasters. This dissertation describes how the working-class people who most directly experienced the disasters understood them and their cities starkly differently than the professionalized relief authorities.

Using a wide array of sources--including government documents, published accounts, archived ephemeral, oral histories, photographs, newspapers in two languages, and the case files of the Halifax Relief Commission--the dissertation describes how elites imposed a progressive state on what they imagined to be a fractured and chaotic social landscape. It argues that "the people" for whom reformers claimed to speak had their own durable, alternative modes of support and rescue that they quickly and effectively mobilized in times of crisis, but which remained illegible to elites. By demonstrating the personal, ideological, political, and practical ties between New England and Nova Scotia and Quebec, it also emphasizes the importance of studying American and Canadian history together, not only comparatively but as a transnational, North American whole.