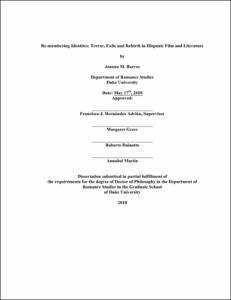 This dissertation examines fictional representations of Argentine and Spanish authoritarianism from the position of exiled, traumatized and/or marginalized subjects. Though the primary texts and films engage questions of terror, trauma and repression from the 1930s to 80s in Spain and Argentina they stand out from works made within these contexts (that is, works lacking spatial and/or temporal distance) by focusing on how and to what extent individual and collective rebirth can arise from the ashes of terror, exile and oblivion. On the one hand, these works explore the ways in which authoritarian terror and repression maintain and are maintained psychologically, historically and ideologically in these cultures by a series of artificial separations between self and other, fantasy and reality, history and fiction, female and male, desire and responsibility, the spiritual and material, plurality and unity, the past and the future. On the other hand, these works suggest that it is by confronting the repressed authoritarian past through pluralistic, fictional, "exilic" retellings that these binaries may be transcended and that identity, history and reality itself may be radically re-membered.

In effect, the capacity to "re-member", which is revealed to be essentially synonymous with the act of "rebirth", demands a confrontation with the past that is every bit as dependent on "fantastic retellings" of both reality and fiction as it is on history or reality--to the same degree, in fact, that the realization of the self is contingent on an encounter with radical alterity. The various forms of monstrosity, exile and ambiguity that coalesce within these films and texts not only enable this to happen, but they imply that the creation of the primary work depends as much on its audience as it does on its author. Accordingly, the ethical processes these works establish, through narrative layering, ambiguity and other techniques, occur not only within the films and texts but in the outer relationships and responses they elicit from their readers or viewers.

Thus, the processes of exile and rebirth that these works establish can only be fully appreciated in dialogue with their audiences (via a "narrative ethics"), with history and with theories ranging from feminism to mysticism to psychoanalysis (drawing on Jacques Lacan, Julia Kristeva, Carl Jung and Sigmund Freud) to ethical philosophers, in particular, Emmanuel Levinas. In my endeavor to stimulate this dialogue, in which I both build on and depart from these theories, I reveal how and why "exile" fiction has become such a crucial medium for refiguring "identity"--a term which itself becomes inseparable from spirituality. Accordingly, spirituality is not detached from reality or fantasy, but rather buried in the repressed identities and memories that, when exposed through the "monstrous ambiguities" of fiction, reveal an indestructible bond between self and other, desire and responsibility, fantasy and reality, among other dichotomies.

At the same time that these works offer positive models of spirituality, rebirth, and re-membering, they incisively critique the repressive ways in which religion and specifically, Christianity, have been manipulated, in conjunction with authoritarian paradigms, to terrifying, repressive, "sacrificial" ends. More generally, all of these works, notwithstanding their "timeless" and exilic dimensions, represent pivotal moments in Spanish and Argentine history while at the same time revealing innate links or analogies between authoritarianism and religious doctrine. On the other hand, the timeless, placeless, exilic nature of these works helps shed light on the growing and global importance of exile film and literature as well as the correspondingly great and ever-growing need to re-examine the lost, buried and terrifying past that they re-member.